I was commisioned to do the advertising campaing for Bellarest Mattress, a company based in Guangzhou, China. The main image show a couple surfing the waves, but…she is doing it on a mattress!. The origin of this crazy idea  was as follows: The manager wanted something related to Australia (the former company was australian before being bought by China). After giving him different ideas and concepts, SURF was the chosen one. No need to say this was so funny to do. We built an U-shaped-three-walled stage, with the waves made of cutted cardboard. The clouds you can see around are actual bedroom lamps we found on Taobao. Other images were also produced, with the couple and the girl alone, resting on the mattress while surrounded by clouds, in the air, giving this sensation of relax and comfort. 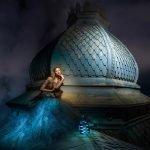